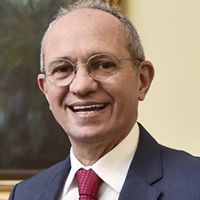 Trustee at the Brazilian Center for International Relations (CEBRI). Economist graduated from the Federal University of Espírito Santo (Ufes) in 1978, he is an Honorary Professor at Vila Velha University (2004). He is "Doctor Honoris Causa" by Ufes (2006).

With a long political career, he was Governor of Espírito Santo for three terms (2003-2010 and 2015-2018), Senator, Mayor of Vitória, Federal Deputy and State Deputy.  Currently, he heads the Indústria Brasileira de Árvores (Ibá), an association that brings together the productive chain of trees planted for industrial purposes. It acts on several fronts in favor of the formation of new leaders, in addition to holding lectures on public management throughout the country.

He is a member of the board of RenovaBR and of Everyone for Education. He participates in the Institute of Health Studies (IES), created by Armínio Fraga. He is a member of the Advisory Board of Education of the State of São Paulo, by appointment of the Ayrton Senna Institute. In 2019, Mr. Hartung was also appointed Advisory Counselor of the Department of Judicial Research of the National Council of Justice (CNJ).

This year, he joined the board of the Brazilian Center for International Relations (CEBRI). He participated in the private initiative as administrative councilor of EDP do Brasil (2012-2014) and Veracel Celulose (2013-2014). He was also Regional and Social Development Director of BNDES (1997) during the Fernando Henrique Cardoso administration. At the invitation of the American Embassy in Brazil, Mr. Hartung participated in an intensive program on Public Administration and Political System in the United States, in 1997.

Where Do We Want to Go?

The Political Crisis and the Dispersion of Federal Power